You are here: Home / William Miller Pioneer of Bible Symbols 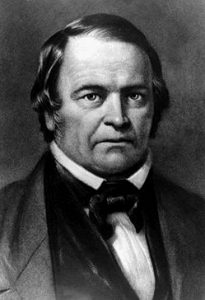 William Miller, a Farmer, Soldier, and a Preacher.

An avowed Deist Born in 1782 in Pittsfield, Mass. While in the 1812 War he changed his mind due to several events during the war that convinced him there was a God that was active in his life and those around him. After his conversion, his father, also an avowed Deist, asked William to justify his new faith. He was determined to Study from the Bible to justify his new faith, so he began in Genesis and read and understood each verse before proceeding to the next verse. In this way, William Miller came to understand Bible Symbols and was convinced that these symbols revealed Bible Prophecy. As he studied the Prophecies of Daniel and Revelation he saw that God had laid out a framework of time revealing Prophetic events. Using Symbols he found that God has used the Day for a Year principle. He learned that the verses in Ezekiel 4:6; Numbers 14:34 revealed this and with these verses and other Bible symbols he used these keys to unlock and understanding Bible Prophecy. Prior to his discovery, most people thought that the books of Daniel and Revelation we indecipherable and incomprehensible, locked to our understanding. Ironically the book of Revelation is named so because it is a Revelation of Jesus Christ, and a Revelation of Prophecy Revelation 1:1 which was given to John the Beloved by Jesus Himself. With Bible Symbols, William Miller was able to trace the Prophetic timeline given in the books of Daniel and Revelation and make charts and timelines to show that God had revealed everything to us before time. By the providence of God William Miller made a mistake. He erred not in the events of the time, but in the current event. He mistook the end of the prophetic timeline as the Second Coming of Christ, instead of the Day of Atonement, which is the Judgment. In Revelation 10:8–11 it describes this event. The sweetness of the Second Advent, became a very bitter experience, as William Miller and his associates preached the Second Coming of Christ, they realized the bitterness of the event as his predictions failed. He went back and studied the timeline and the prophecies and realized a couple of errors in some exact dates calculating the Day of Atonement in the Sanctuary Service, he adjusted the timeline to reflect his new prediction only to repeat the same bitter experience again when the event failed to come true a second time. William Miller’s mistake was not in the timeline but in the event. Following the example of the Sanctuary in the Wilderness which William Miller used to help him to predict the date (October 22, 1844) he overlooked the event he was predicting, the Day of Atonement, which is not a symbol for the end of the world, but for the Day (Time) of Judgement. William Miller’s bitter experience left him and many other wondering what the error was? They went over it again and again but came to the same conclusion that the date was right, the event must be wrong.

William Miller left a legacy of his study in the material he wrote. One of the most important documents that he wrote was “Rules of Interpretation” which is available on the Documents page In this document is a list of Symbols that Miller complied. I have also added a more modern adaptation of William Miller’s rules on symbols on the page, “Rules for Symbolic Interpretation”