You are here: Home / Blog / Symbols / Angels – What the Bible Says About Angels 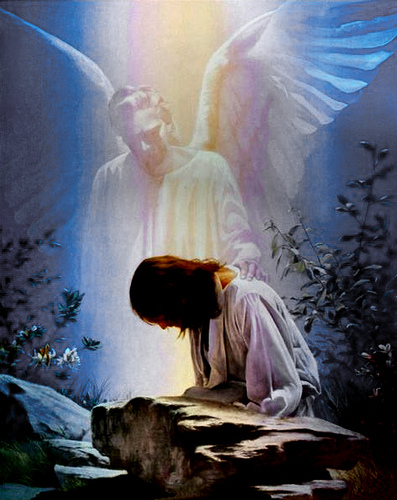 Symbolic Definition and Use:

What does the Bible say about Angels? Angels have been depicted in various ways throughout the history of this world. As I looked through the available Angel pictures on Google Image it’s hard to select an accurate image of what an angel is, because of all the uneducated depictions of angels there are out there. How can I make that claim? We have to use the Bible as our guide for what we know on this topic. You may be thinking about people that you know, or have heard of people that have seen angels in person and have described them. Can’t we trust these descriptions? We can’t trust the things that we see, they may be deceptions. The Bible says in 2 Corinthians 11:14

that Satan transforms himself into an “angel of light”. So what can we trust? The word of God is the only thing that we can trust. It is the measure by which we test all things. If what we see, read, or hear does not agree with the Bible then it is a deception of Satan, the “Angel or Prince of Darkness”. It serves his purpose to give a false impression about what angels are. Remember, Satan is a fallen angel. In Luke 10:18

Christ said “I beheld Satan as lightning fall from heaven.”, and Isaiah 14:12

Says about the same thing, Ezekiel 28

calls him the “Prince/King of Tyre” and describes him and says that he was the anointed covering cherub Ezekiel 28:14

.
Of Gabriel, one of the few angels mentioned by name in the Bible, it says: “I am Gabriel, that stand in the presence of God” Luke 1:19

. Gabriel is one of the angels that stand in the presence of God, he probably was the one to have taken Lucifer’s place when he became evil and was cast out. Gabriel then became the special messenger (Angel) of God.

Angels have most often been depicted as female. Many of these inaccurate depictions of angels seem to make angels out to be, in part, sexual beings, or cute little children, or Motherly protectors. With the Exception of Protector, none of these ideas are Biblical. The Bible doesn’t specifically say but indicates that angels are neither male nor female. 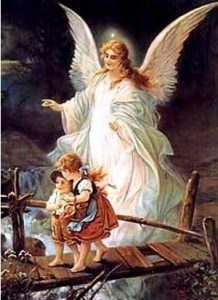 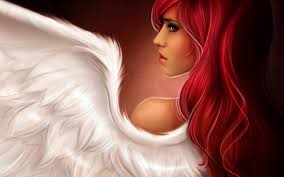 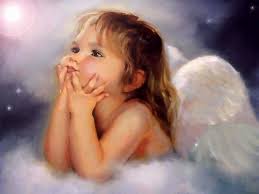 How do we find out what is truth and what error? As I have said before on the Website the Bible is our guide. So let’s use the Bible to find out.

are messages sent to the seven churches throughout the ages of time, Revelation 14:6

also describes messages sent to the people of the last days to prepare a people to be ready for the return of Christ. So now we understand that Angels are both Messages and Messengers.

What do we know from the Bible about Angel beings?

There are Good Angels and Bad Angels. God created all the angels, but when Lucifer sinned he also became the father of lies John 8:44

because he learned that he could sway the opinion of other angels by changing the truth into a lie. By doing this he convinced one-third (1/3) of the angels Revelation 12:4

to follow him in his rebellion against God. Eventually, god’s forbearance was full and he cast Lucifer out of heaven with his followers. There was war in heaven Revelation 12:7-9 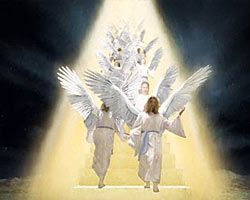 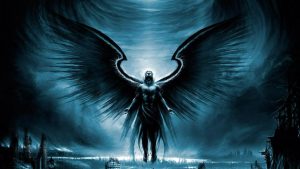 What does the Bible Say about Angels?

We know from the account of Lucifer in Ezekiel 28

that angels are very beautiful because God made them that way. Ezekiel 28:12

says that Lucifer was, “full of wisdom, and perfect in beauty”. Because of their beauty, angels Have been depicted as sexual beings, usually female, but Matthew 22:30

says while talking about the Pharisee’s Question about a fictitious woman who had been married seven times due to her husband’s dying, whose wife she would be in the resurrection? Jesus said:

“24 Do ye not therefore err, because ye know not the scriptures, neither the power of God? 25 For when they shall rise from the dead, they neither marry, nor are given in marriage; but are as the angels which are in heaven.”

This means that the angels and also humans when they are in heaven do not marry or have children, therefore angels are not sexual beings, nor do they seduce men or women nor participate in sexual acts.

Angels can appear as men on earth. In the story of the destruction of Sodom and Gomorrah Abraham is visited by three angels (one is Jesus Christ) walking by, whom are described as men in Genesis 18:2

the two angels visit Lot in Sodom and they are described as men in Genesis 19:5

by the inhabitants of Sodom.  This same story is referenced in the Book of Hebrews 13:2

where it says that “some have entertained angels unawares.” So we see from these verses that angels can have the appearance of men and men cannot tell that they are angels until it is revealed to them.

The Bible describes two types of angels, Seraphim and Cherubim. The book of Ezekiel describes these angels especially in Ezekiel 1

where Ezekiel and Isaiah and John see the Throne Room of God in vision, and describe the angels that are there.

Guardian Angels – Provide help for us in a time of need, they are commissioned by God to help us, but they are not our servants at our beck and call, but they are servants of God, and He commissions them to protect God’s People – Psalm 34:7

says that they can appear as Spirits.

They are smarter than we are.

Ministers –  Angels can act as ministers to those in need. 1 Kings 19:5 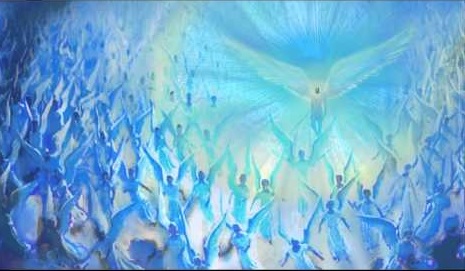 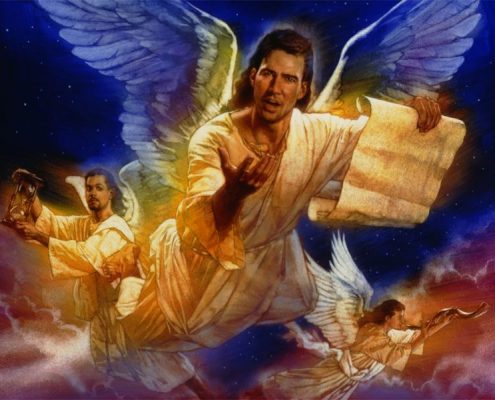 In the Bible there are just two angels mentioned by name, or three if you include Michael.

This means he was an angel of the highest rank and had the privilege of being next to God in the throne room of the courts of heaven. He was exalted above the other angels, by privilege, and position.

He was a very wise being, this chapter talks a lot about his wisdom and intelligence. We should be careful of his intelligence, if we think that we can outsmart Satan we would be fooling ourselves. The only way we can overcome his intelligence is by allowing Christ too direct us, and not try to take on Satan without his divine guidance.

also talks about his beauty, and how God made him perfect in beauty, not a flaw in his looks. This beauty and riches along with his exalted position eventually created a self-centered attitude in him to where he started to feel that he should be part of the Godhead Ezekiel 28:2

tells us of the self-centered character he developed in him until sin was found in him. The letter “I” is at the center of sIn as described in Isaiah 14:13-14

says that sin was found in Lucifer, the father of lies. John 8:44

Gabriel is the only other angel that is mentioned by name in the Bible besides Lucifer. Gabriel is first mentioned in Daniel 8:16

. Gabriel was sent to make Daniel understand the vision. Then again in Daniel 9:21

Gabriel is sent to give Daniel “skill and understanding”, also we see another characteristic of angels here where Gabriel is sent swiftly. Gabriel is sent at the beginning of Daniel’s prayer and arrives before the end of his prayer. From heaven to earth in less than a few minutes. Even if Daniel had a very long prayer, it’s still an incredible speed in which Gabriel arrives at Daniels side and touches him. The next time we see Gabriel’s name in the Bible is in Luke 1:19

where he appears in the Sanctuary as Zacharias officiates as priest, and gives Zacharias the good news that his wife Elizabeth will have a son. In Luke 1:26

he is then sent to Mary to announce to her that she will have a son as a virgin. In these verses it tells us that Gabriel is an angel that stands in the presence of God, the same as Lucifer did, the covering cherub stands before the presence of God.

says that Michael is the Archangel the word archangel means the chief angel or the Leader, or head of the angels. The name Michael means “who is like God” (see Strong’s G3413).  1 Thess 4:16

say that when Jesus returns “For the Lord himself shall descend from heaven with a shout, with the voice of the archangel, and with the trump of God:”. In light of all these verses we find out that Michael the archangel is none other than Jesus Christ Himself.

Satan is a deceiver, and the father of lies. One of his most deadly tricks is to impersonate an angel from heaven or even Jesus Christ Himself. 2 Corinthians 11:14

says that this is what Satan will do. He “transformed into an angel of light”, and Revelation 13:12-14

says that the Image to the Beast will cause fire to come down from heaven like Elijah did, to deceive the whole world, but this time through the power of Satan impersonating God.

We need to be very careful when dealing with any supernatural being, they are smarter than us and stronger than us. Their object is to take our eternal life away from us so that we will suffer the same fate that they are destined to face Jude 6-7

How do they Appear when they appear to us? And how can we know if an angel/spirit is good or evil? 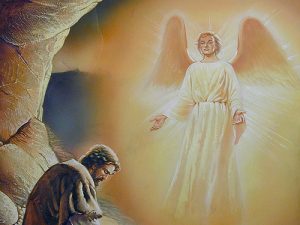 An Angel Visits John at Patmos

Angels are Beautiful and majestic beings; unlike anything we know. They were created that way to serve God. But we must be careful not to accept anything that they say. We must test them before we can trust them. It is not an insult to holy angels to test them, they know as well as we do that Satan is a deceiver and he seeks to have us. Holy angels are willing and eager to confess that Jesus Christ has come in the flesh.

Symbols in Ecclesiastes 9:8
Scroll to top